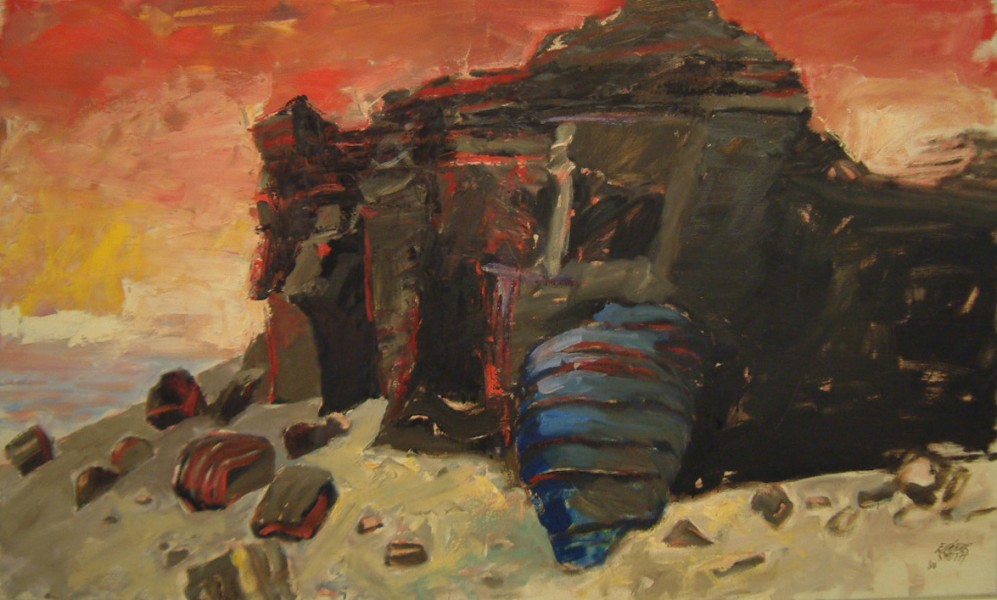 Eiríkur Smith’s fifth and last exhibition, in a series of exhibitions studying the artist’s career, opens Saturday November 7th at 3 p.m. Oil and watercolor paintings made since 1982 and until today will be on display.

Eiríkur Smith’s (b. 1925) career is both long and wide-ranging. He has addressed painting as a form of expression and created works that bare witness to a unique grasp on different styles ranging from geometric abstraction to expressive abstract painting, and realism. The human figure is often in the foreground while the landscape and human creations form a powerful framework. His approach has gone through numerous changes in line with the times, and also due to the artist’s active pursuits into new territory.

Conversing with Existence features works from 1983-2008, when Eiríkur decided to hang up his paintbrush due to ill health. These are obviously the works of a mature artist and yet they display signs that Eiríkur continues on the artistic quest that always defined him. During this period in his career he was working with both abstract and figurative art, experimenting with form and colour, often taking risks contrary to current trends. This was true of both his content and methods, a good example being his interpretation of human spiritual existence and bold choices of colour. The most defining factor of this period though, is the artist’s take on the painting. He tackles the form and the qualities of colour, texture, arrangement, and the potential of different tools. The spiritual themes of the previous years are still evident in this last period of Eiríkur’s artistic career, and nature is always present in his work.

In the last few years of Eiríkur’s career there is a clear and formed graphic notion and personal vision, but he was still very much tackling painting as an artform. Eiríkur’s spiritual quest led him into fields of the painting where he discovered a hitherto unknown space. An almost abstract pictorial surface breaks into the otherworld, and at the boundaries of the worlds is a human figure, often miniscule in comparison to the surroundings but still the pivotal energy that everything else revolves around. The title of the exhibition, Conversing with Existence, is taken from one of the Eiríkur’s works of this kind, which he recently donated to the Museum with other works.

With the exhibition, Conversing with Existence, the Museum aims to present a diverse period in the artist’s career. It is a long period in comparison to the experimental and often short spells that characterised his earlier years. Eiríkur produced a massive body of work and over 400 works are preserved in Hafnarborg, many donated to the Museum by the artist in 1990. Hafnarborg has strived to procure works by Eiríkur in order to establish a collection that offers a comprehensive perspective of his career.

In 2010, Hafnarborg started a series of exhibitions presenting different phases of Eiríkur’s long career. The first exhibition in the series was titled Formlegt aðhald (Formal Discipline), and offered an overview of Eiríkur’s works in the first years following his return to Iceland from Copenhagen and Paris late in 1951. The next exhibition, Brot úr náttúrunni (Fragments of Nature), spanned 1957-1963, when Eiríkur focused on lyrical paintings inspired by nature. Then came Síðasta abstraktsjónin (The Last Abstraction) featuring expressive abstract paintings from 1964-1968. Tilvist (Existence) covered 1968-1982 when Eiríkur’s work was veering towards realism. That period is in fact twofold; the former half was characterised by political questions on human existence in society, while the latter half focused on human existence in the universe. The exhibition now on in Hafnarborg is the final installation in the series and is accompanied with a publication on all five exhibitions and Eiríkur Smith’s career.